What are the REAL “best times to tweet?” Excellent question.

To determine best times for your particular business to tweet, you must look at your own past tweet analytics. So if you have an existing Twitter account with a good amount of followers, tweets, and engagement, look here instead for help determining best tweet timing.

Otherwise, if you’re starting from scratch with no timing data to analyze, the infographic here will help.

Before relying on any third-party tweet timing guidelines (even ours!), you need to know where the data comes from, and how to know you can trust it. (More on that below.) 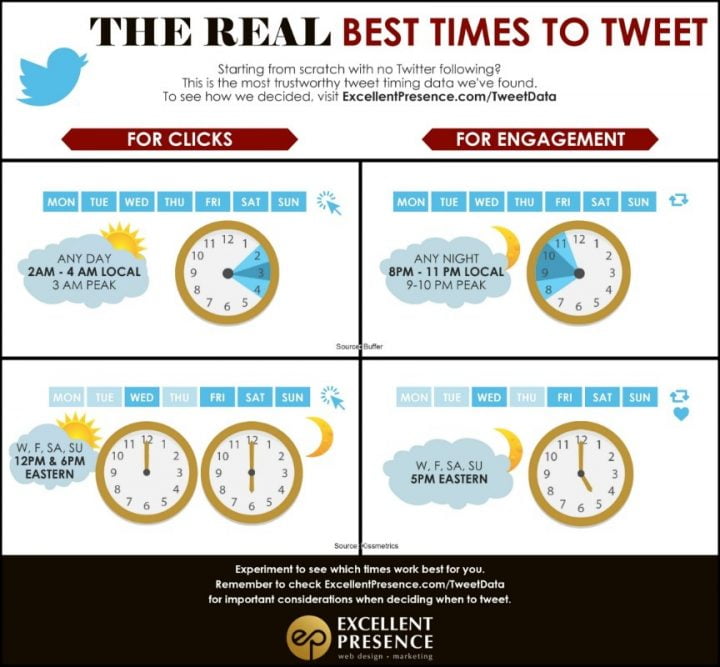 Most “Best Times to Tweet” Data Online is Faulty

To say that most tweet timing “data” is suspicious in some way seems like a pretty large claim — especially with companies like Buffer, Hootsuite, Hubspot, Kissmetrics, and Coschedule publishing their “findings.”

So why the tongue-in-cheek quotation marks and thinly-veiled skepticism?

At the risk of appearing to pick on them, we’ll discuss how CoSchedule, a popular company in the social media arena, compiled their “data.”

Specifically, we’ll look at one of their data sources: SurePayroll.

When a Data “Source” Isn’t Really a Source

First, we must question whether SurePayroll is an authority on social media marketing. Obviously not—they don’t operate (or offer any services) in the industry. This is evident by the name, and by perusing their website.

Of course, one becomes “an authority” by researching a topic thoroughly, teaching it, then gaining recognition for their expertise.

Not being an authority shouldn’t be held against a researcher because they’re not widely recognized. Of course.

On the other side of that, SurePayroll obviously does not even seek to be an authority on social media.

Their website deals chiefly with — you guessed it — payroll. “Small business tips,” where the social media article was found, comprise but one section. Since their small business clients trust their payroll expertise, the other related info (like social media help) is likely there to serve them more comprehensively.

Where Did the Researchers Get Their Data?

On SurePayroll’s blog, you’ll find a very well put-together infographic with many stats… but no real data sources.

The “sources” listed at the infographic bottom are curious, to include “Mashable” and “TechCrunch.com.”

Other listed sources are more credible-sounding, (at least at face value — like Buffer, that did its own study, and SimplyMeasured, that offers vast social media analytics).

The iffiness of some sources and overall lack of specificity call into question the integrity of their overall findings.

This doesn’t mean that their data is unreliable, but it’s certainly now questionable.

Lastly, it’s unlikely SurePayroll would outlay big time and money on extensive research for an article so far outside their expertise.

Now, back to CoSchedule… who has listed SurePayroll’s “study” as one of their 16 sources.

When Popular Sites Use Questionable “Data”

Because we can’t know whether SurePayroll’s data is fully legit, we consequently now can’t know if CoSchedule’s can be either.

To add further insult to injury, more than one of CoSchedule’s “sources” (i.e., Fast Company) uses SurePayroll as a source.

To their credit, I love how the CoSchedule post summarized findings from each “source” after its timing recommendations. This actually increases the credibility of their data compared to others’ online.

They also appear to base their social media tool’s autoschedule feature on those findings, as opposed to the secrecy of how Hootsuite calculates their autoschedule.

Even still, it remains to be seen whether CoSchedule’s social timing data is valid in this particular post.

When researching for our social media guide, I was excited to uncover a “study” from Microsoft. With their budget, I thought surely their research would be some of the most legit.

Their “findings” were actually some of the least credible I encountered.

No direct links to studies or data used.

No further source details at all.

Just list “Huffington Post” as a source… and we’re supposed to trust the integrity of this data?

Google tweet timing data, and you’ll find an array of colorful, eye-catching, brilliantly designed infographics and graphs. But due to unclear resarch integrity, there are only a few whose data we trusted enough to share with you.

With all this to-do about trustworthiness and sources, now you need to know how we compiled our tweet timing data, and why.

When Googling “best times to tweet,” there were many resources that 1) cited at least one of the above dodgy “sources,” 2) cited no concrete sources at all, or 3) cited our top choices below.

Therefore, here are the only two sources we deemed reliable enough for our infographic:

Buffer, a popular social media scheduling tool & blog: Did their own study of 4.8 million tweets as sent through their tool, across various industries, from 2010 to 2015.

Kissmetrics, a popular analytics tool & blog: Compiled infographic with data from Dan Zarrella, who did a 2009 webinar describing his very informal “study” and analysis of several popular Twitter accounts, including @NYTimes, from which he compiled diverse ideal posting data.

I decided that this was the best way to compile the data, aside from doing our own “study” of tweets. But as Zarella has already done that, and since you’re only using this tweet timing data until you compile enough data to analyze your own anyway… these findings should be sufficiently reliable for your purpose.