Stay the Course: The Importance of Marketing Persistence

On this cool January morning, I drove my son to his bus stop through wet snow flurries.  Arriving only a moment or two after our usual time, we noticed that the teen-aged boy, whom we usually beat to the stop, was already there.  Soon after arrived the third child, also chauffeured to the stop by her parent.  And there we waited … and waited … and waited. 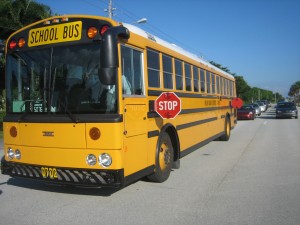 Our driver, usually at least five minutes earlier than his scheduled stop time of 6:38 A.M, was slightly off schedule. Consequently, by 6:36 or so, the parents were all antsy.  By 6:40, our antsiness began to approach anxiety.

At approximately 6:43, our anxieties were eased as we noticed a bus trundling down the hill to the stop.  But for first time we’d ever seen, it paused, roof lights flashing and cycling, several yards back from the corner where we waited.

After another minute or so, the bus started lumbering toward us again, finally coasting to a stop at the sign where parents and students either sat or stood.

Once the yellow bus arrived, I noticed its age.  Our usual bus was brand spanking new.  This one had clearly “been around the block.”

Was it really for us?

Almost as soon as my mind began to contemplate the question, it was quickly answered: After a brief pause, the bus turned the corner without pausing to pick up any little passengers.

At 6:45, we had long since begun to wonder just what in the heck was going on. It had rained on many occasions before, but had never delayed our driver this much.

At exactly 6:49 A.M., a silver sedan pulled up to the corner.  The teen-aged boy approached and entered the backseat, having summoned another ride to school via text message. Then, not even a full minute later, the other parent backed up, executed a “U,” and slowly — with obvious uncertainty, craning his neck longingly one last time as he left — resigned to driving his young passenger to her respective school.

And then, it was only us, me and my son: the last ones standing (or “sitting”… in our trusty and well-loved old-school SUV, as it were).

I felt a pang of, not uncertainty, but mild perplexity then, as I, again, contemplated possible reasons for the bus driver’s highly unusual delay.  I thought not at all of leaving, however, remembering the transportation department’s directive to “arrive at each stop at least 15 minutes early (especially at the start of any school year),” as “stop times are approximate.”

And so, we waited.

Just then, not even one full minute after the last parent had lost confidence and abandoned the stop, another bus came down the steep hill at an easy glide, lights flashing, to collect the one lone child whose parent had stayed the course.

I felt a pang of exhilaration — as much exhilaration as my pre-10 A.M. brain could muster, that is — a sense of victory.  It was a small one, but I surely felt like we’d won nonetheless, certainly as we had watched the other “contenders” drop away like flies.

“Ha-haaaa!” I exclaimed to my middle schooler. “We won!!”

Unfazed, he gave me another head butt -slash- 6 A.M. hug and went out into the still dark day to board the bus, markedly less smug than I about our tiny victory.  And I drove home to write and share these lessons with you.

But what have we learned…?

1. Set marketing timelines and stick to the schedule… but expect change.

Fly by the seat of your pants with your company’s marketing and it’s doomed before you’ve begun. By contrast, formulate a solid plan complete with timelines, measurable goals, and milestones against which you can regularly check progress, and more than half of your battle is already won.

Stick with whatever marketing techniques you’ve chosen for your company for long enough to see if they work. So many businesses trying new or unfamiliar marketing tactics give up quickly when results aren’t seen immediately, and then fall victim to the clearly erroneous mantra that “nothing out there truly works.”

Unexpected delays and “red herrings” will puzzle you from time to time… but goal-focused marketing still works, if you work it.

Don’t know enough about marketing… or just not up for the challenge?  Find a website marketing consultant you trust, and allow them to find the best marketing strategies for you.

“The crowd” encompasses those that throw in the towel long before giving their selected marketing tactic(s) (or businesses) a chance, as well as those who chase after the latest and supposedly “greatest” marketing fad.

MOST people tell you their “dream” of how they’ve “always wanted to” start a business.

MOST people don’t have the determination or resolve to see that “dream” through. It remains a dream.

MOST people ask YOU for the secrets of your success… as if you could really teach them, in 5 minutes or less, upon first meet at a networking event, how to start and build a successful enterprise.

Remember: YOU are not “most people.”

If success were that common, every fledgling business would achieve it. So don’t throw in the towel when the average person commonly does… unless you’ll be satisfied with accomplishing “average” quality goals.

4. Celebrate the small stuff along the way. It’s important.

Be always mindful to appreciate the small successes, like achieving your first sales, leads, followers, or subscribers from trying a new marketing method. Those little victories motivate you to see the rest of your plan through.

5. Nothing worth having will be gained without persistence.

In my most vulnerable and least self-assured moments, I sometimes feel that we business owners have less confidence than others, and it’s the propensity toward second-guessing ourselves that, itself, pushes us toward a perfectionistic ideal… which, in turn, pushes us further toward success!

What I do know for certain is that one of the surest ways we all can fail at something is by lacking the determination to succeed.

Nothing in this world can take the place of persistence.

Talent will not: nothing is more common than unsuccessful men with talent.

Genius will not; unrewarded genius is almost a proverb.

Education will not: the world is full of educated derelicts.

Persistence and determination alone are omnipotent.

You may not need to completely change the course of your marketing; you may just need to tweak your direction. Don’t make it harder than it has to be. Find out how you can improve the results and response of your website marketing to continue on the path to success.